Living in New York isn’t cheap. At all. In fact, New York living costs are about 68.8% higher than the national average. If you are thinking about moving to this city, first of all, you need to establish can you afford it. NYC is the dream of many, and a great place to live in, but that comes with a pretty high price tag.

What is the true cost of living in New York City?

As a big metropolis, New York City is one of the most expensive towns in America by the living costs. You need to have a big luck to find affordable housing. Even then, you are facing the highest income taxes in the country, and food prices that can be up to twice the national averages.
What are the New York living costs and can you afford them is one of the first things that you need to know about NYC.

Cost of housing in New York

The housing market in NYC is one of the Americas most expensive markets.
The median rent for a two-bedroom apartment is in average $1,638 in the New York metro area.
Doesn’t seems too bad, doesn’t it? Still, this average calculation includes cheaper suburbs also, so they don’t paint the real picture. The location has a big impact on the renting prices.
If you like to move to the core of the city, be prepare that average two-bedroom apartment in Manhattan can set you back for around $3000 – $4000 each month.
That’s roughly equal to the entire monthly income of the typical U.S. worker.

Cost of buying a house in New York

Have you ever wonder why many New Yorkers are renting instead of owning a home? While they can trick you with the teils that they don’t want to be tied down with property ownership, the truth is a bit grimmer – they can’t afford it.
Statistics data says that home price New York metro area is $455,500.
Once again, that severely understates the situation, since the cheaper, less attractive parts of NYC are included in the survey. Since location is everything in this city, homes at the city core are selling from $1 million and up. 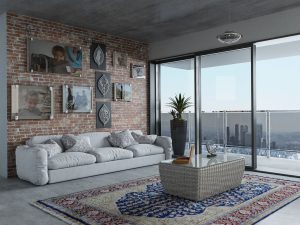 It is hard to find affordable housing in NYC.

Cost of Utilities in New York

While the other things are more expensive, the monthly bills for utilities aren’s so high in NYC.
Average basic utility package that includes heating, electricity, water, and garbage is about $127.02.  Which is approximately 14% lower than the U.S. average.
The monthly cost of internet averages $53.37, which is just slightly above the national average of $52.02.

New York living expenses rise significantly if you are a car owner. Parking is very expensive, and parking spot in Manhattan can cost you up to $533 per month. The parking is more affordable in other New York boroughs like Brooklyn or Queens, but you should set aside a few hundred dollars to keep your car in a lot or garage.
The gas prices are often 5-10% higher than the national average, as well as the car insurance.

If you are planning to move to New York, think about leaving your car behind. It is one of the most expensive in the nation, but it is a great way to get around after moving to New York.
A monthly transit pass in New York costs $116.50 per month, which is 75% greater than the national average, but it really worth it. 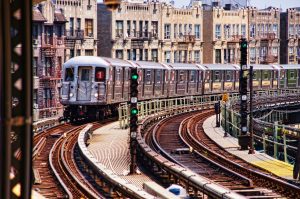 New York has the best public transportation in the country.

Cost of Food in New York

Groceries costs are a big impact on New York living costs. Depending on which part of the town you live in, grocery prices are 28% to 39% higher than the national average.
If you spend $100 on the food in your hometown, you can expect that the costs for groceries in NYC will be around 160%.

Dining out in New York is an amazing, but very expensive experience.

Now that you know approximately how much money you will need to cover New York living costs per month, you need to be realistic. Write them all down and calculate the total amount. Be truthful to yourself and see can you really afford them. If the total monthly New York costs exceed your incomes, then you need to evaluate your decision about moving to this city.
Especially because these are all just the basic living costs, without entertainment and lease costs.
If you are sure that your finances can handle your relocation, you can start planning your moving to New York.

Tips to save money in NYC

If you are determined to start your new life in New York, you should know the tips and tricks for saving money in this expensive city.
Some of these methods may seem too alternative for you, but some may give you a good idea of how to save a few bucks: